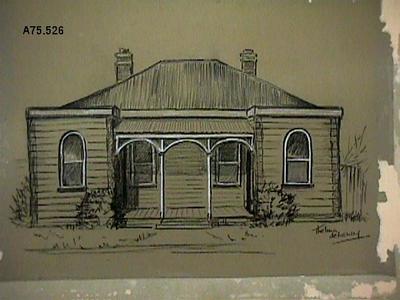 Description
An unframed black and white pastel picture by Thelma de Lancy-Green, on beige paper which is glued to cardboard support. Image is of a house. Signed in lower right corner"Thelma de Lancy" and underlined. The rear has a label with "OLD LABOUR DEPARTMENT BUILDING.[underlined] / Demolished. Silver Street, N.P. [underlined] / View from courtyard at rear. Was the / Post Office in 1873. Moved to Silver / Street in 1879 when it became the Police / Station. Later occupied by Labour Department" adhered, top right, and underneath in blue ink "No 45" underlined twice. Top left corner has in red marker pen "1060" and under this "A75.526". The same appears in the middle also. There are remnants of brown selotape around the edges.
See full details