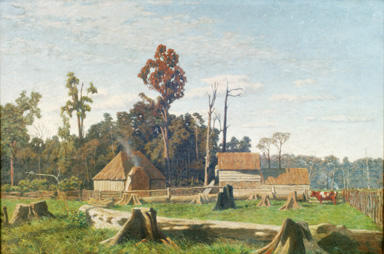 Production date
Circa 1855
Description
Homestead and barn at Merton on the outskirts of New Plymouth. Cleared land, felled trees and stumps are visible in the foreground. A single cow is situated in the lower right corner. The cottage was originally called "French's house" when it was built by John French, a settler from Holne, Devon, who arrived on the ship William Bryan in 1841. Henry and James Richmond later bought the cottage and were living in it in May 1851. The cottage was enlarged and improved to become "New Merton" and became the Richmond's first homestead.
See full details

It was called French's house as it was owned by my gt, gt, grandfather - John French - who was from Holne, on the edge of Dartmoor, Devon, England. He was born in 1812 and was one of the first settlers to arrive at Moturoa on the William Bryan. His house only had a dirt floor when he sold to the richmonds and moved to other land near Baker road, next door to the farms of Arthur and Harry Atkinson. All the houses were burnt and stock run off during the wars with only Harry's (now called Hurworth Cottage) surviving. French was the earliest of the French - Batten - Spencer families that lived in this area until recent years.