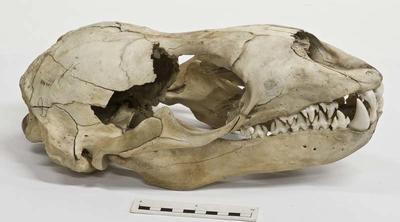 Description
A skull and mandible of a Leopard Seal (Hydrurga leptonyx). The skull has been broken into several pieces before being glued back together and the mandible appears to have been broken in half. Three top teeth are missing and some small chips of bone are also missing from various places. There are a number of pencil marks on the bone which it appears were used to help glue the skull together.
See full details

Credit line
This battered Leopard Seal skull tells of a violent death on a New Plymouth beach. This fearsome looking skull, which has been shattered and then carefully reconstructed, belongs to a stray beast which hauled up to rest on Ngamotu Beach in 1974 only to be confronted by police.
The details of what came next are still shrouded in mystery but the Antarctic voyager, which was over two metres long, was shot and killed and brought into Taranaki Museum.
At the time the reason given for the shooting was “because it couldn’t walk.”
While this is true in one sense, as Leopard Seals can’t raise up on their front flippers, it seems an inadequate justification with the benefit of hindsight. Leopard seals, which can grow up to about 3 ½ metres long and weigh 300-500kgs, are formidable hunters that feed on fish and krill but are capable of killing penguins, other seals and small dogs just as easily. The seals live on the Antarctic pack ice and they are infrequent visitors to the Taranaki coast. Thankfully most of them return to sea unmolested.