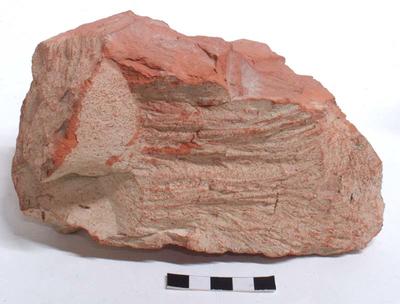 Production date
Early 20th Century
Description
A lump of burnt papa. It is a light terracotta colour and has numerous faces and rough edges. " MARCO SADDLE " is written in pencil on one face.
See full details

Credit line
In addition to the problems posed by rugged topography, in some inland areas of Taranaki, there is no hard rock suitable for road making. In the past, fired papa mudstone , like this chunk collected from the Tahora Saddle in east Taranaki in 1988, provided a cheap and innovative way to surface roads in the area. Papa was converted to brick in roadside kilns, and then spread on to the roads.
Small kilns were constructed on the sides of the road. 'Face kilns' were made in cavities that were blasted in the sides of the papa cliff, and built up with alternate layers of timber and clay. Both types of kilns were covered with more clay before being lit. Firing took several days, after which the brick-like product was broken up by hand and spread on to the road. Nearly all of Taranaki's burnt papa roads are covered now with gravel or bitumen, but fragments may still be seen on Marco Road near Kohuratahi, and outside the Whangamomona cemetry.
' Papa burning ' was used in the Whangamomona and Ohura Areas, and on Mount Messenger. Once the railway arrived, howerver, gravel was railed in, and papa burning finished.