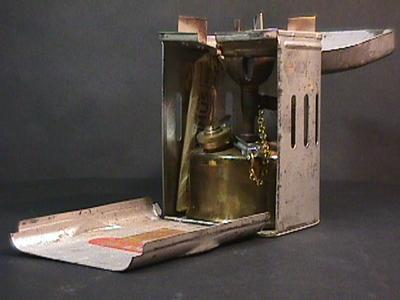 Description
A small brass Primus gas stove contained in a silver coloured metal casing. The stove has a round canister base from which extends a short vertical pipe on top of which sits the element. There is another tube with a valve which controls the gas flow. A silver-coloured metal spanner like tool is attached to the stove by a chain. This is used to turn the valve. " PRIMUS No 71 / MADE IN SWEDEN ". is impressed on the valve. " TRADE MARK / PRI - MUS " is also marked on it with a small engraved image of a Primus stove between "PRI" and "MUS". The metal casing is designed to be used while the stove is contained within it. There are four thin square vertical pieces of metal attached to the top on which to rest the container being heated. The case itself has two hinges - one on the lid and one on the lower rear base which allows the front to fold down and the gas stove to be removed. Inside the flap is a red and yellow sticker which states (in six different languages) to leave the door open while stove is in use. There is a large colourful circular sticker on the front side which depicts an image of a Primus stove with the sea and sky behind it. It has the word " PRIMUS " in black text above the stove and " REG. TRADE MARK " in yellow below the stove. " A/B B.A. HJORTH & Co. STOCKHOLM SWEDEN " is written in yellow at the base of the sticker. " REG. TRADE MARK / PRIMUS / SWEDEN " is pressed into the lid of the casing. A small rectangular paper packet accompanies the stove which contains three metal cleaning spikes. These are used for clearing blockages from the gas jets of the element.
See full details