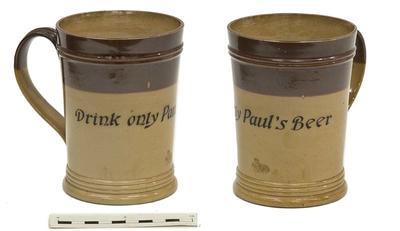 Production date
1906-1911
Description
A two tone earthenware beer mug. " Drink only Paul's Beer " is written in black on the side of the mug. " Doulton / Lambeth / England / 7161 " is stamped on the base.
See full details

Credit line
James Paul was one of those larger than life figures in New Plymouth in the later part of the 19th Century. Originally from Girven, Scotland, he emigrated to the Otago Goldfields in the early 1860s before venturing north to New Plymouth. In 1863, in partnership with Mr W. Henderson, he established the Egmont Brewery at the rear of what is now the TSB Showplace. This partnership was dissolved and in 1878 and Paul opened a new brewery on a site which is now part of the Richmond Centre. This construction caused a bit of a sensation in that concrete was used, the first such building be constructed in New Plymouth. This brewery continued in operation until 1971.
As well as being a prominent businessman Paul served as Mayor (1884-1886), was an all-round sportsman, racehorse owner, one-time officer in the militia and founder of the New Plymouth Bowling Club. He died in 1906.
This rare mug, made by Doulton Lambeth, was probably a promotional giveaway and carries the words “Drink Only Paul’s Ale” prominently around the outside.