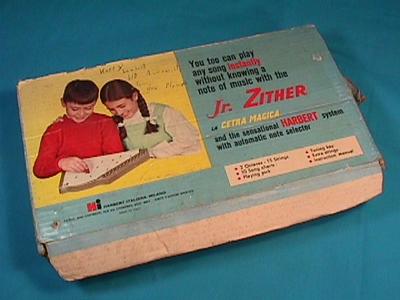 Production date
Circa 1970s
Description
A junior zither which has a flat silver-coloured metal soundbox with fifteen metal strings stretched horizontally across it with associated tuning knobs. It features two Grecian-type figures sitting down playing harps (man and a woman) with a single harp at the top right corner. " Harbert Italiana Milano " is marked on it. It has a wooden backing board and is contained in a cardboard box and accompanied with a celluloid imitation tortoiseshell pick, thin paper information manual and nine song charts. The cardboard box is mainly pale blue with a yellow insertion at the top left corner on which features an image of a boy and a girl playing a zither.
See full details

Credit line
This zither was bought by the Pirini family at a New Plymouth garage sale in 1998.