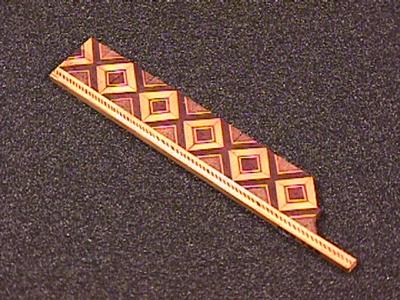 Description
A thin sample strip of marquetry. A piece at one end and one side of the strip is missing.
See full details

Credit line
This piece of fine marquetry shows how a notorious Taranaki outlaw saw the light and turned his life around.
As a young man, Robert Wallath terrorised New Plymouth during the early 1890s, carrying out a series of robberies while wearing an elaborate pseudo military disguise and gaining infamy as the Highwayman.
After being dramatically unmasked in a failed attempt to rob the Criterion Hotel he was sentenced to eight years jail.
He emerged from jail a changed man with strong religious convictions and went on to lead a quiet and productive life as a builder.