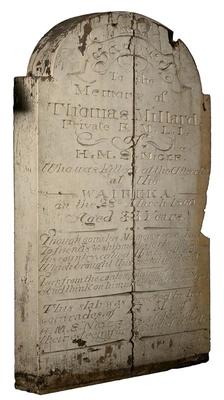 Production date
1860
Description
A large wooden arch shaped tombstone for Private Thomas Millard of the H.M.S. Niger. The tombstone has been painted a cream colour which is now partially covered by a green moss-like substance. " Sacred / To the / Memory of / Thomas Millard / Private R.M.L.I / of / H.M.S. Niger / who was killed at the Attack / at the / Waireka / on the 28 March 1860 / Aged 33 years. / Though gone his memory's ever dear / To friends and shipmates far and near. / His country called him to attend / Which brought this mortal life to end. / Turn from the contemplation of the sool [sic] / and think on him whose spirit rests with God. / This slab was erected by his / comrades of R.M. of / H.M.S Niger as a token of / their respect for departed worth." is carved on the front. A ship's anchor has been carved on either side of the word " Sacred " at the top. The lower portion is covered in dirt. This was the section that was inserted into the ground and it appears to have been treated with some kind of protective coating.
See full details

Credit line
This marker stood over the grave of Private Thomas Millard at St Mary's Church, New Plymouth. Millard, a marine from the H.M.S Niger, was one of two Pakeha killed at the battle of Waireka. Waireka was the second battle of the First Taranaki War in 1860-1861. It turned out to be a confused affair in which the local militia and volunteers were pinned down by Maori the local Pakeha troops were apparently abandoned by their colleagues from the Imperial forces. So a unit of Royal Marines eventually attacked the nearby Kaipopo Pa to relieve them.