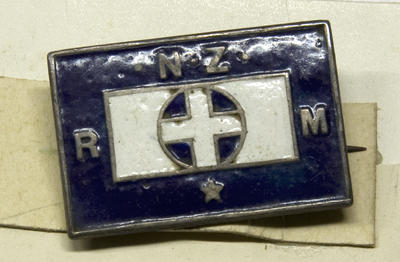 Production date
1921
Description
A blue and white enamel metal New Zealand Registered Masseuse badge. The rectangular badge features a white enamelled cross at the centre of a white enamelled rectangle. These are surrounded by a dark blue enamelled area. " N. Z. /R M " is marked in silver on the blue and a small star is in silver near the bottom. A simple pin is attached to the reverse. 234 / MARY ELLEN AFFLECK / 1921 " is marked on the reverse. It is mounted on a piece of card along with A Certificate of The Services in the New Zealand Expeditionary Forces issued to Mary Ellen Affleck.
See full details

Credit line
This badge was awarded to Mary Ellen Affleck, a daughter of Robert and Jessie Affleck, of Opunake. Mary trained and embarked as a nurse with the New Zealand Army Nursing Service Corps during World War One. She served in the New Zealand General Hospital in Cairo, Egypt and in the General Hospital in Brockenhurst, England. She also appears to have served on hospital transport ships. During this period she likely also trained as a masseuse. After the war, the Masseuse Registration Act 1920 was passed in New Zealand and those who had already completed their exams and worked as masseuses were officially issued a registration number and badge in 1921.