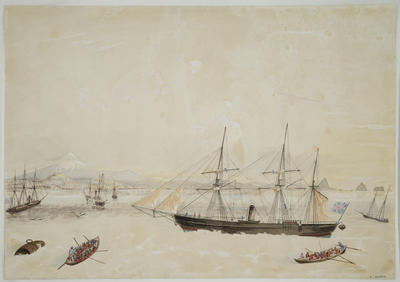 Production date
Aug 1860
Description
Imperial troops disembarking the "H.M.V.S. Victoria" off the coast of New Plymouth. Two surfboats carrying soldiers in red coats are featured in the foreground. Both boats are chartered by men in blue and white suits (Navy?) and a large cask floats in the water to the left of the boat in the left corner. Men wearing both uniforms can be seen on board the "H.M.V.S. Victoria" which is flying the Union Jack from a staff at the rear of the boat. Several other ships, including the "Airedale", "George Henderson" and "Tasmanian Maid", are headed towards New Plymouth which is located near the centre left edge beneath Mt Taranaki/Egmont. The barracks on Marsland Hill is the main feature of the settlement. The Pouakai and Kaitake ranges, as well as the Sugar Loaf Islands, feature as part of the landscape profile.
See full details