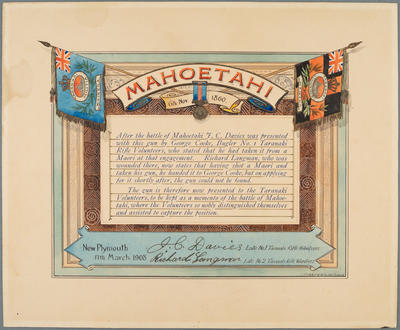 Production date
17 Mar 1908
06 Nov 1860
Description
Certificate pertaining to the gun used at the battle of Mahoetahi on 6 November 1860, presented to the Taranaki Rifle Volunteers on 17 March 1908.
Inscription on certificate reads:
"After the battle of Mahoetahi J.C. Davies was presented with this gun by George Cook, Bugler No. 1 Taranaki Rifle Volunteers, who stated that he had taken it from a Maori at that engagement. Richard Longman, who was wounded there, now states that having shot a Maori and taken his gun, he handed it to George Cooke, but on applying for it shortly after, the gun could not be found.
The gun is therefore now presented to the Taranaki Volunteers, to be kept as a memento of the battle of Mahoetahi, where the Volunteers so nobly distinguished themselves and assisted to capture the position."
See full details