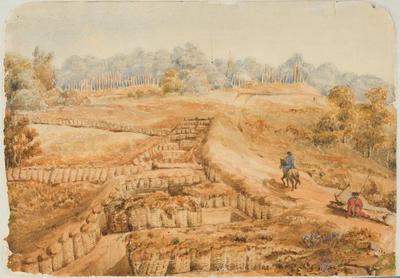 "The Limit of the Sap at Te Arei"

Production date
19 Mar 1861
Description
View of the end of Pratt's sap, which was constructed during the siege of Hapurona's Pa, Te Arei (seen in the background) with further protective outwork on the left. Shown as it appeared on conclusion of fighting between the Maori defenders and British forces, 19 March 1861. Seated Maori figure with horse and rider on left side.
See full details

"The Limit of the Sap at Te Arei"