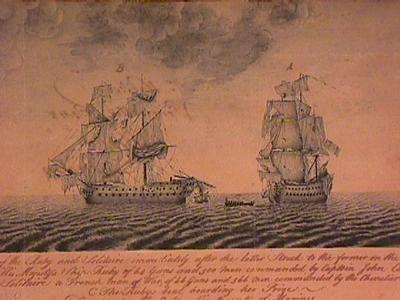 Production date
1782
Description
Ink and wash of two battleships (British and French) after a battle at sea - both ships have torn sails. Below image are the words:- "A View of the Ruby and Solitare immediately after the latter Struck to the former on the 6th Dec 1782. A. His Majesty's Ship Ruby of 64 guns and 500 men commanded by Captain John Collins. B. The Solitaire a French man of War of 66 guns and 566 men commanded by the Chevalier de Horda [?]. C. The Ruby's boat boarding her prize. Drawn by M. Oates Lieutenant of Marines".
See full details