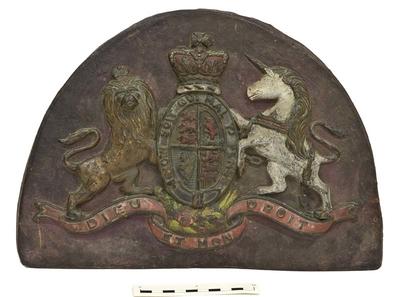 Production date
1907-1914
Description
A hand painted pottery plaque featuring the Royal Coat of Arms in bas-relief. There is a crowned lion on the left facing side and a unicorn with a crown around its neck on the right facing side. On the right hand side is a white unicorn with a crown around its neck. A chain is attached to the crown. " HONI SOIT QUI MALY PENSE " is written on the centre fo the shield which is divided into quarters that signify England, Scotland, and Ireland. " DIEU ET MON DROIT " is written on a scroll along the bottom.
See full details

Credit line
Taranaki, it would appear, does not have a great tradition in the field of pottery, although in recent years a few individuals have made a name for themselves both locally and nationally. Clay, the raw material for a colonial pottery was always here, as shown by the number of brickworks scattered through the province over the years.
Some of these brickworks, the Johnson Brothers works at Waitara in particular, progressed to the stage of making terracotta butter coolers but there is no evidence they went beyond this basic level.
The only attempt to go beyond the mundane was made in 1907 by William Jemison of Frankley Road, New Plymouth. Jemison located a source of clay on the Smart Road property of Mr Sorrenson and tried to interest local businessmen in financing a pottery industry. To help sell the idea he made a selection of items such as bricks, a chimney pot and roofing tiles. Thanks to the support of one businessman, Samuel Hill, Jemison stamped some pieces “Sam Hill’s Clay, Smart Road, Taranaki.” One of these pieces is a bas-relief of a Royal Coat of arms. It would appear that Jemison’s venture did not get off the ground.