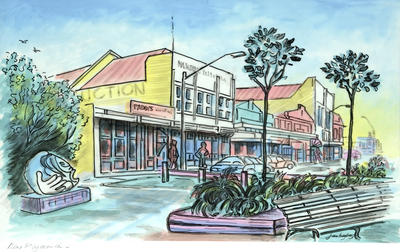 Production date
1993
Description
The picture depicts part of the Puke Ariki Landing (the stone sculpture designed and partially carved by Sopolemalama Filipe Tohi with carving assistance from Maurice Whitehead and others. Also gardens and park bench). Also shown is the central city end of St Aubyn Street - pre the 1996 demolition showing the National Dairy Association building, which later became Gilmour's Auction and a Paddy's Market beside which is the Messenger-designed building that later is incorporated into Puke Ariki's facade. This building was the warehouse of businessman Charles Anderson Wilkinson.
See full details