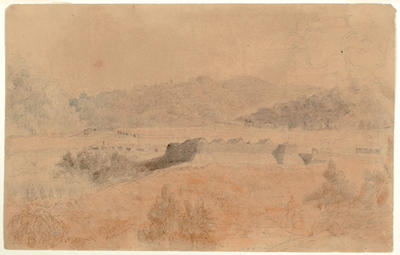 Production date
1871
Description
Small pencil (field?) sketch depicting the Wai-iti Armed Constabulary Redoubt - centre forground. Shows square, earthen walls of redoubt with roof tops just visible inside the compound. Two men stand below flag - right side of redoubt. To the right of this, two men stand along fenceline outside walls of compound. Small patch of bush located to left of redoubt, above which (and into the distance) is the Bushranger's redoubt, Papatiki. Clearing immediate foreground with part of tree cutting in from middle right edge. Large bush clad hills in distance - background. Wash and colours noted on sketch. Housed in folder of white matting board.
See full details