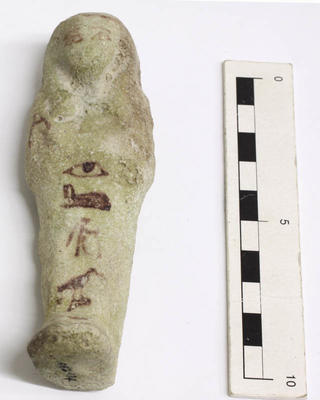 Production date
1600 BC-1400 BC
Description
A collection of Egyptian funerary artefacts including three ushabti figures.
1.) A mummy figure made from green glazed limestone which has hieroglyphics marked on the front including an " eye ", " sphinx ", the "prince", "tahuti" and " justified " . The facial features are defined in the brown paint or dye. The figure has a brown thatched square marking on the back and is holding an agricultural implement. The figure is clad in funeral dress. 2.) A limestone mummy figure wearing traditional funeral attire with green/blue glaze. Black marks are outlined on the shoulders and across the back. The black marks on the front represent agricultural implements, which are held in the mummies hands. 3. A limestone boar headed figurine in a standing position with hands by its sides. The figurine probably represents a form of the sun god.

The collection also includes a turquoise blue glazed seal ring which features an image of the Lotus flower.

The collection also includes a stone seal with relief carving on the top and bottom surfaces. The top surface features several triangular shapes. A hole is bored through the centre of the stone orientated top to bottom.

The collection also includes a scaraboid, or scarab in the shape of a ram. The ram has a carved relief image on the base and a hole through the centre. A typed card with accompanying handwritten notes is included with the collection " EXCAVATIONS AT ABYDOS, UPPER EGYPT, 1907-8. DYNASTY XVIIIth B.C 1600 / ABYDOS: TOMB........ / " Ornamental seal device " is written on the card.
See full details

Credit line
This collection of artefacts was given to New Zealand serviceman Alexander Strang during 1915 when he was recovering in Cairo from injuries he suffered at Gallipoli. They were sent back to his parents house soon after he acquired them. Abdyos is the common English name for an ancient city in upper Egypt which has is an important and much explored archaeological site.