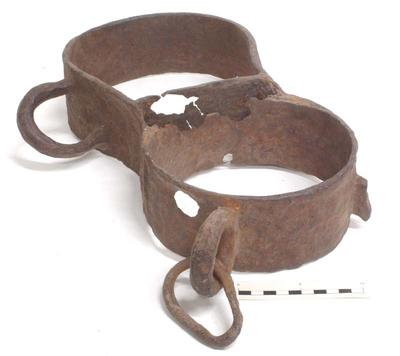 Production date
Circa 1860
Description
A corroded metal band from the niu pole at Whakamara. The band, originally from a ship's mast has two ring shaped openings separated by a small rectangular gap. The larger opening is fastened to the lower mast and the smaller to the top.
See full details

Credit line
This band is from the large niu at Whakamara, south Taranaki which was destroyed by an Armed Constabulary force in 1869 as they pursued Tītokowaru. This niu, which was associated with the Pai Marire religion, has been described in the book The New Zealand Wars and the Pioneering Period by James Cowan as "a lofty rimu mast, 4 or 5 feet through at the butt... the flag-mast was set up like a ship's mast, with topmast and crosstrees and four yards. The lower yard was crossed about half-way up the lower mast. At the crosstrees on the lower-mast head two yards were crossed at right angles to one another, and then a little way below the topmast-head there was another yard, a small one. The topmast-head was over 80 feet above the ground. At every yardarm there was a block with rove halyards which led to the ground, and on all these halyards except the lowest, Maori war-flags were flown. A dozen flags, or more, were displayed. Some were British flags, Union Jacks, given to the Maoris before the war; some were flags bearing the words ‘Tiriti o Waitangi’ and ‘Kingi Tawhiao’ some bore stars and other devices. Several of the flags dated back to the time of the Treaty of Waitangi; others had been given to Taranaki by Waikato and King Tawhiao. The priest of this pole of worship was Te Whare-Matangi.” Mr. William Wallace, ex-sergeant No. 2 Division Armed Constabulary, says:—
“We cut this niu down when we captured Whakamara in 1869. We had seen the flags flying on it from a great distance off long before the fight. It was the tallest niu mast I have ever seen. It was a great pity, I think, that it was destroyed.”