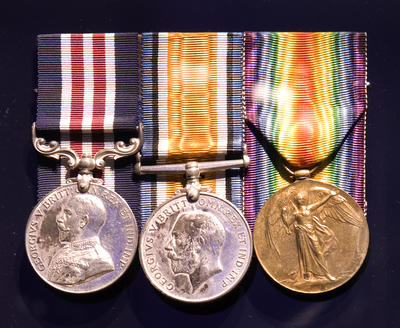 Description
A British War Medal. The obverse features an uncrowned left facing portrait of King George V. " GEORGIVS V BRITT: OMN: REX ET IND: IMP " is marked around the profile. The reverse features a St George figure on horseback which is trampling a shield representing the Central Powers and a skull and crossbones. A sun is in the background. " 1914 1918 " is marked around the edge of this scene. "10912 PTE. J.E. SHEWRY N.Z.E.F." is inscribed on the edge. The ribbon has a watered orange centre with stripes of black and white at the sides and royal blue edges. The medal is mounted as part of a group of three.
See full details

Credit line
This medal was awarded to Taranaki farmer John Edward (Ned) Shewry, who served with the New Zealand Cyclist Corps during World War I. "Just as Ned's chopping career looked set fate stepped in and ground it to a halt. His dreams of continuing the competition circuit were blunted. World War I drew New Zealand's young men away, Ned and his brother David included. In 1915 the pair sailed overseas on the SS Maunganui where Ned, and eventually his brother, served... Ned served in Egypt, France and Belgium.
Tragically David died from injuries received in France in 1917. Ned was wounded twice and awarded the Military Medal for bravery - saving an officers life while under fire. He himself was lucky to survive the war when he was buried alive - only the quick actions of his friends saved him from suffocation. Ned didn't totally abandon his axe. He joked that he only received the Military Medal ‘because I kept the cookhouse supplied with kindling wood!’ But his skills with an axe came to the attention of some top axemen serving with the Canadian, Australian, British and American forces. A sawmill had been established at La Matee Wood to provide timber for trenches and dugouts. "Somebody told them that they had the New Zealand champion chopper there and you'd better sharpen up your axes because you won't have any chance with him," recalled his sister Rose. "They didn't believe it… They thought nobody from New Zealand was going to show them how to chop. When it came to chopping day they did get beaten!" See: A Chip off the old Block – Ned Shewry by Sorrel Hoskin http://www.pukeariki.com/Research/TaranakiResearchCentre/TaranakiStories/TaranakiStory/id/635/title/a-chip-off-the-old-block-ned-shewry.aspx