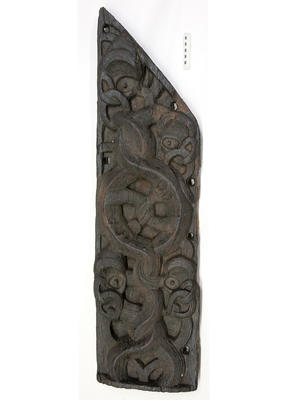 Description
Consists of four entwined serpentine bodies with four heads in side profile attached. The two on the left side have pointed foreheads while the other two on the right have no forehead. The two top figures have their necks entwined as well as their legs. Both of their arms are also entwined with the bodies at this point forming a circle with the arms linking in the middle of it. The two bottom figures also have their necks entwined. The lower part of their bodies is not shown. Faint outlines of puwerewere and raumoa/haehae are present on some of the eyebrows. Very little background decoration is shown, having been severely eroded, but what is there consists of bands using the rauponga design as is shown in the "V" design at the base of the epa which extends down from each mouth of the lower figures under the body to join at the centre of the base. One lashing hole is present at the top of the epa, two on the left side and three on the right side. This epa would fit on the right side of a pataka when viewed. The carving is in deep relief.
See full details