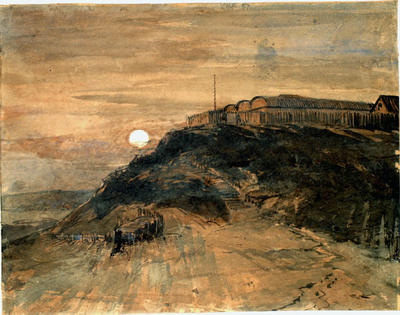 Production date
1855-1860
Circa 1859
Description
View of Marsland Hill from the north west with full moon rising in the south east. Barracks on top of hill with steps curving down and towards foreground.

Marsland Hill provided the single most important European military establishment of the Taranaki Wars. First occupied in 1855, it provided the headquarters for Imperial troops and local forces in Taranaki until the Armed Constabulary period of the 1870s and 1880s. The site was a former pa, Pukaka, and to provide a sufficient platform for the barracks and stockade, twelve metres had to be removed from the top. The iron clad barrack buildings which were erected on top of the hill arrived from Melbourne on the "Alexander" in June 1855. Marsland Hill was at the centre of an extensive signaling system throughout the First Taranaki War and for part of the second war. Three or four canvas wicker balls were raised or lowered on the yards of a signaling mast. At its greatest extent the signaling system reached the Waitara River to the north and St George's Redoubt in the Tataraimaka Block to the south.
See full details