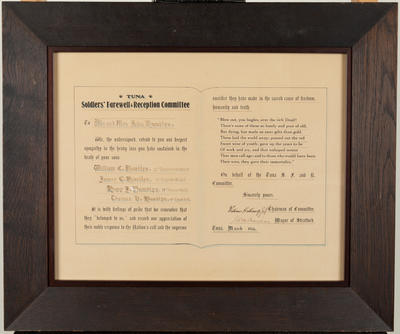 Production date
1918
Description
'Tuna Soldiers' Farewell and Reception Committee' Certificate awarded to Mr Charles John Hamblyn and Mrs Mary Ann Hamblyn of Tariki, Taranaki. Certificate acknowledges death of their four sons; Henry John, Thomas Day, Edward James and William Charles who all died during action in World War One between 1916-1917. Certificate is signed by William Hathaway, Chairman of Committee, and J.W McMillian, Mayor of Stratford, March 1918. Names of the four sons along with the dates and places of death are attached to glass of frame.
See full details