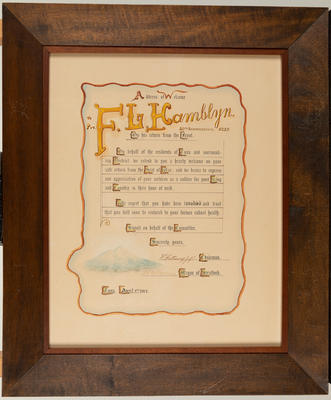 Production date
1919
Description
'Address of Welcome' Certificate awarded to Private Frederick Leonard Hamblyn, (Service Number 48868), on his return from the front of World War One where he was a part of the 26th Reinforcements of Wellington Infantry Regiment, B Company AWMM New Zealand Expeditionary Force. Certificate is signed by William Hathaway, Chairman of Committee, and J.W McMillian, Mayor of Stratford on April 4th 1919. Four of Hamblyn's brothers were killed in action in World War One, which lead to Fredericks discharge from service in April 1919. Certificate depicts small painting of Mount Taranaki.
See full details