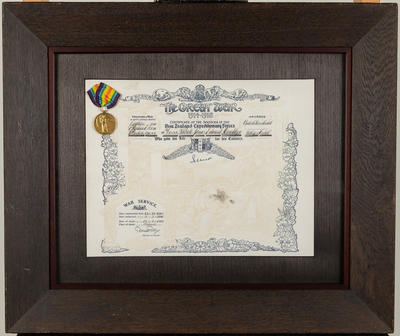 Production date
1918
Description
'The Great War 1914-1918, Certificate of the Services in the New Zealand Expeditionary Force' awarded to Private James Edward Hamblyn, Service Number 10/3894. Certificate states Hamblyn served in the Egyptian Theatre of War in 1916, the Egyptian Expeditionary Force in 1916, and the Western European Theatre of War in 1916-1917. Hamblyn was killed in action on 27 July 1917 in France, aged 28. Three of his brothers, Henry John, Thomas Day and William Charles were also killed in World War One. Certificate states Hamblyn was awarded the British War Medal and Victory Medal. One medal is attached to certificate.
See full details