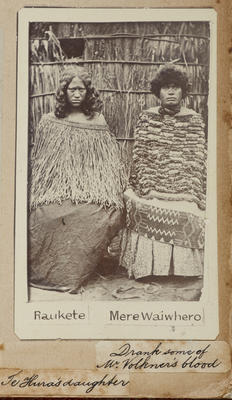 Production date
Circa 1900
Description
Copy of an original carte de visite portrait of Ngāi Te Rangihouhiri and Ngāti Awa rangatira Te Hura Te Taiwhakaripi's daughter, Mereana Raukete, and a woman identified as Mere Waiwhero. Both women appear seated and facing forward. Raukete wears a dark-toned skirt and pihepihe around her shoulders. Her hair is shoulder-length and wavy. Waiwhero wears a light-toned, patterned skirt, a dark-toned neck scarf, kaitaka adorned with tāniko edging and possibly a mangaeka on top, which may indicate her high status and connection to Ngāi Tuhoe. Her hair is short and curly. They are seated in front of a wall made from raupō and flax fibre, which has a hole in the upper-left corner, above the image of Raukete. The photograph is included on page 62 of William Francis Robert Gordon's album "Some "Soldiers of the Queen" who served in the Maori Wars and Other Notable Persons Connected Herewith", under the heading "Some notorious Hauhaus."
See full details