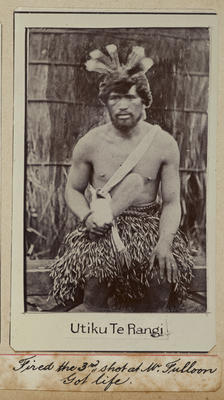 Production date
Circa 1900
Description
Copy of an original carte de visite portrait of Utuku Te Rangi of Ngāti Awa. Utiku appears seated, facing forward and looking slightly to his right. He wears a sash across his chest, piupiu, and five or six huia feathers in his hair, which is short and curly. His left hand rests on his knee, and in his right hand he holds a patu. Utiku has a full but short beard with a moustache and sits in front of a wall made from raupō and flax fibre. The photograph is included on page 62 of William Francis Robert Gordon's album "Some "Soldiers of the Queen" who served in the Maori Wars and Other Notable Persons Connected Herewith", under the title "Some notorious Hauhaus."
See full details