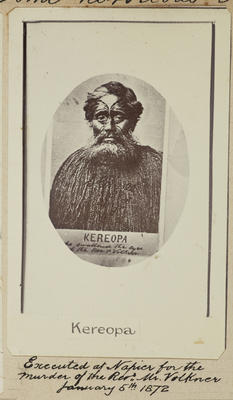 Production date
Circa 1900
Description
Copy of a copy carte de visite portrait of Pai Mārire disciple Kereopa Te Rau of Ngāti Rangiwewehi. Kereopa's portrait appears as a carte de visite image inside an oval frame of another carte de visite, where he appears from the chest up, facing forward. His facial tā moko has been accentuated and he wears a pihepihe around his shoulders. His hair is short, wavy and dark, with a grey streak at the front on the left side. He also sports a large, grey beard. Inside the oval portrait the carte de visite reads "KEREOPA" and , although slightly obscured, "he swallowed the eyes of the Revd. Volkner". There appears indecipherable handwriting on the image of his torso, likely to have been on the original portrait copy. The photograph is included on page 62 of William Francis Robert Gordon's album "Some "Soldiers of the Queen" who served in the Maori Wars and Other Notable Persons Connected Herewith", under the title "Some notorious Hauhaus."
See full details