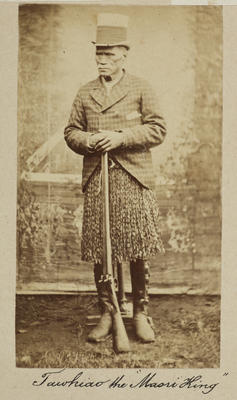 Production date
Circa 1900
Description
Copy of an original carte de visite portrait of Tūkaroto Matutaera Pōtatau Te Wherowhero Tāwhiao, Ngati Mahuta and Tainui rangatira, and the Kīngitanga's second Maori King. Tāwhiao appears standing outdoors, facing slightly toward his right. He wears a light-toned top hat with sash, a chequered jacket with pocket square, piupiu, and knee-high buckled boots. In his hands he holds the end of a rifle, which he rests on the ground in front of him. Behind Tāwhiao is what appears to be a light stand, emanating a light-toned glow around him on the painted backdrop behind. The photograph is included on page 61 of William Francis Robert Gordon's album "Some "Soldiers of the Queen" who served in the Maori Wars and Other Notable Persons Connected Herewith".
See full details