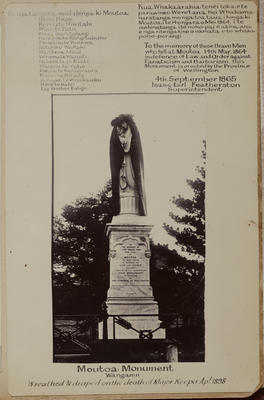 Production date
Circa 1900
Description
Copy of an original carte de visite photograph of the Moutoa Monument in Whanganui, commemorating the battle of Moutoa Island in 1864. The Monument depicts an aggrieved woman on a pedestal. In the photograph, it is draped in a cloak and wreath to further commemorate the death of Te Rangihiwinui Te Keepa, who fought in the Moutoa battle, and continued his allegiance to the Crown throughout the New Zealand wars. In the foreground, there is a dark-toned metal fencing. In the background, a building is partially visible through some trees, on the right hand side. The photograph is included on page 60 of William Francis Robert Gordon's album "Some "Soldiers of the Queen" who served in the Maori Wars and Other Notable Persons Connected Herewith".
See full details