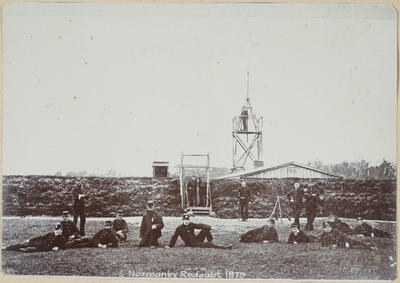 Production date
Circa 1900
Description
Copy of an original photograph of the Normanby Redoubt in 1879. The photograph shows the fortification wall and entrance, with a signalling tower in the background. In the foreground, eleven soldiers pose, lying on their sides. Three men pose, standing behind the officers lying on the ground, two on the right side and one on the left. in the background in front of the wall, a soldier stands to the right of the redoubt entrance, holding a rifle at his side. To his left and slightly forward stand two rifle leaning on a branch fixture. At the far left of the photograph stands another soldier with his arms folded. Two soldiers appear standing in the entrance way, the left man leaning on the right man's shoulder. In the far background, a lone solder stands on the signalling tower platform. The roof of a building is visible above the wall, to the right of the tower and treetops can be seen in the distance. The photograph is included on page 59 of William Francis Robert Gordon's album "Some "Soldiers of the Queen" who served in the Maori Wars and Other Notable Persons Connected Herewith".
See full details