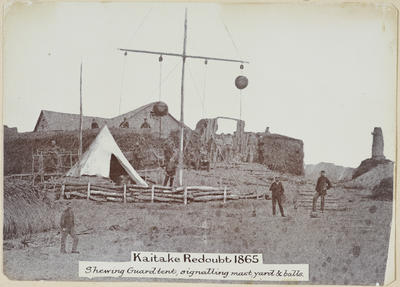 Production date
Circa 1900
Description
Copy of an original photograph of Kaitake Redoubt in 1865. The photograph shows the signalling yard, complete with guard tent (light-toned, left hand side) mast and balls (central) and the redoubt fortification (background). Three men stand in the foreground, one on the left and two on the right, near steps up to the fortification. Many others stand throughout the picture, particularly around the raised fortification entrance. Some notable individuals include a man standing to the left of the tent, a man standing at the bottom of the signalling mast, and three men in the middle right appearing over the redoubt wall, visible in front of a building. A lone monument appears on the far right of the photograph. The photograph is included on page 59 of William Francis Robert Gordon's album "Some "Soldiers of the Queen" who served in the Maori Wars and Other Notable Persons Connected Herewith".
See full details