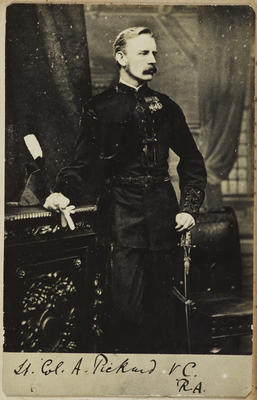 Production date
Circa 1900
Description
Copy of an original portrait of Lieutenant Colonel Arthur Frederick Pickard, V.C., of the Royal Artillery. Pickard appears standing, from the knee up, facing to his left. Dressed in formal military attire, he wears a belt, a jacket with elaborate cuffs, and two medals on his left breast, one of which is the Victoria Cross. His light-toned hair is coiffed to the side, and he dons sideburns and a large moustache. In his left hand, Pickard holds a sword, in his right he holds his gloves and leans on a cabinet to his right. Atop the cabinet sits his feathered hat.In the background on the right of the photograph sits a chair, and in the distance a window and curtain is featured. Another curtain is featured closer to Pickard, on the left side of the photograph. The photograph is included on page 54 of William Francis Robert Gordon's album "Some "Soldiers of the Queen" who served in the Maori Wars and Other Notable Persons Connected Herewith".
See full details