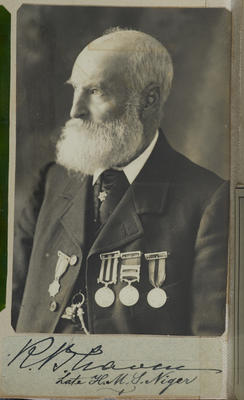 Production date
Circa 1900
Description
Copy of an original studio portrait of Richard Bridge Craven of the H.M.S Niger in his later years. Craven appears from his waist up, seated facing to his right. Dressed in formal military attire, Craven wears three service medals on his left breast and an unidentified medal on his right. His watch chain is visible on his waistcoat and he also wears a small, star-shaped pin on his tie. He has a large, light-toned beard and is balding with short hair. The photograph is included on page 49 of William Francis Robert Gordon's album "Some "Soldiers of the Queen" who served in the Maori Wars and Other Notable Persons Connected Herewith".
See full details