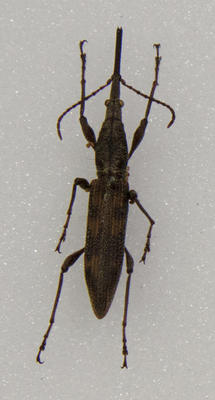 Credit line
The bizarre-looking, flightless giraffe weevil is one of the largest and most primitive of Taranaki's beetles. It drifted here on the piece of Gondwana that is now New Zealand. Some Māori considered the uncommon beetle, shaped liked a waka (canoe), to be the guardian of their vessels.

The male giraffe weevil is usually much longer than the female, and his antennae are situated near the end of the long rostrum, or beak. The female, who has to bore holes in trees to lay her eggs, has her feelers halfway down the rostum.

The larvae (grubs) live in a variety of native trees, including lacebark, pigeonwood, karaka and rimu.