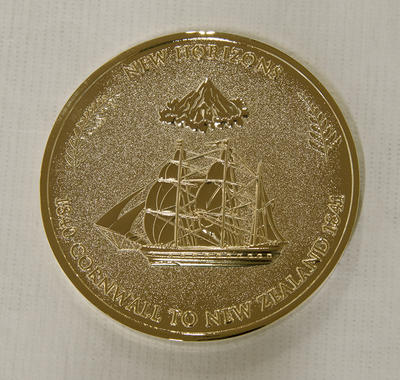 Production date
2016
Description
The Pearn Kindred New Horizons medal. Gold medal, with the William Bryan ship on the obverse, underneath the peak of Mount Taranaki. The words "NEW HORIZONS / 1840 CORNWALL TO NEW ZEALAND 1841" surround it. The reverse has a stylised image of a mother and children seated in a rural setting of peace and prosperity with the words "THE PEARN KINDRED / AN EXTENDED FAMILY IN MANY LANDS" surrounding the image. Designed and produced to commemorate the 175th anniversary of the Pearn family's arrival in New Zealand. The medal is housed in a small, black box on a pillow of blue velvet.
See full details

Credit line
The medal was designed and produced by Professor John H. Pearn. He is a direct descendant of Elizabeth and Jonathan Pearn. He produced the coin especially for the 175th anniversary of the Pearn's arrival in New Plymouth on the William Bryan in 1841. The anniversary was celebrated by a family reunion. This coin is number thirty of a limited edition of thirty.