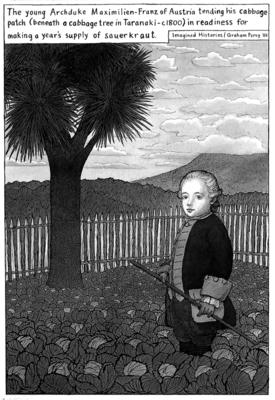 "The young Archduke Maximilien-Franz of Austria tending his cabbage patch (beneath a cabbage tree in Taranaki - c1800) in readiness for making a year's supply of sauerkraut."

Production date
2005
Description
Monochrome ink drawing by Stratford-born artist Graham Percy. The drawing depicts an imaginary scene in Taranaki where a young Archduke Maximilien-Franz of Austria is tending to a large crop of cabbages beneath a cabbage tree. The Archduke is dressed in a coat with large cuffs, pockets, and front panels over a shirt with frilled sleeves and breeches. His hair is styled in a late 18th Century fashion. He is standing amongst the cabbages with his feet hidden in the crop and is holding a garden tool in both hands. Behind the Archduke is a fence made of bound sticks, and the slope of Mount Taranaki is just visible in the background.

The drawing is part of Graham Percy's 'Imagined Histories' series from 2005, which follows a group of unlikely early settlers cultivating the land in an imaginary pre-European New Zealand. Other works in the series show two young Austrian Archduchesses playing in Taranaki's famous black sands and an Austrian Empress and her son celebrating the opening of their cake shop in Opunake.

The drawing was included in the exhibition "The Imaginative Life and Times of Graham Percy" that was shown at Puke Ariki from April 26 to June 8 2014 and also toured around over venues in New Zealand.
See full details

"The young Archduke Maximilien-Franz of Austria tending his cabbage patch (beneath a cabbage tree in Taranaki - c1800) in readiness for making a year's supply of sauerkraut."