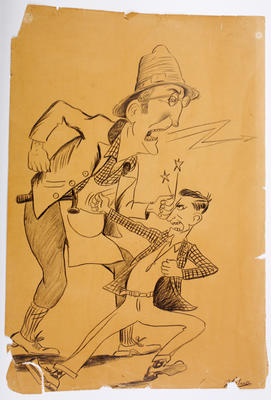 Description
Cartoon drawing depicting a fight between a foreman and a shipwright at the New Plymouth wharf. The shipwright is the tall figure on the left. He is wearing an apron over a shirt and pants, with a jacket on top. He has a hammer attached to his waist on his right. The shipwright is seen leaning over the foreman, yelling at him and punching him in the face. The foreman has been identified as Les Crow. Les is well-dressed with a patterned jacket and socks, and his hair styled. He is seen punching the shipwright in the stomach. The scene represents foremen at the wharf often taking the law unto themselves in a wharfside 'David versus Goliath' parody.
See full details