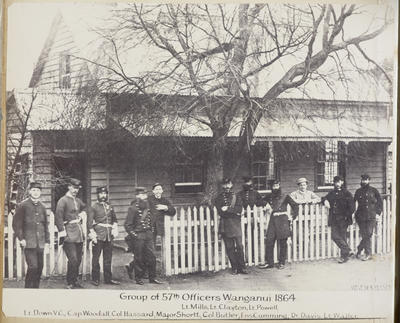 Production date
Circa 1900
Description
Copy photograph of original informal group portrait showing officers from the 57th (Middlesex) Regiment in Whanganui, 1864. The officers are standing in front of a house with a large tree and white picket fence out front. They are wearing a mixture of military and civilian outfits. From left they are Lieutenants Mills, Clayton, Powell, Down (V.C.), Captain Woodall, Colonel Hassard, Major Shortt, Colonel Butler, Ensign Cumming, Doctor Davis and Lieutenant Waller. The photograph is included on page 41 of William Francis Robert Gordon's album "Some "Soldiers of the Queen" who served in the Maori Wars and Other Notable Persons Connected Herewith".
See full details