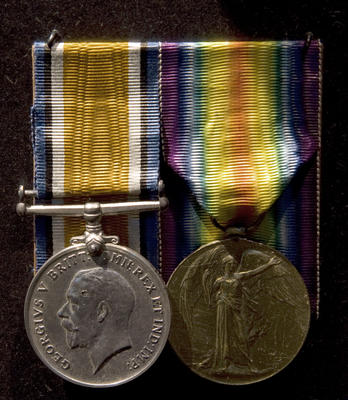 Description
A British War Medal. The obverse features an uncrowned left facing portrait of King George V. " GEORGIVS V BRITT: OMN: REX ET IND: IMP " is marked around the profile. The reverse features a St George figure on horseback which is trampling a shield representing the Central Powers and a skull and crossbones. A sun is in the background. " 1914 1918 " is marked around the edge of this scene. "38074 RFLM. W.W.W. SCANLAN N.Z.E.F " is marked on the edge. The ribbon has a watered orange centre with stripes of black and white at the sides and royal blue edges. It is mounted as part of a medal group of two.
See full details

Credit line
This medal was awarded to William Webber Wilson Scanlan. Scanlan embarked with the 22nd Reinforcements of the Wellington Infantry Regiment, B Company on 16 February 1917 and was serving with the New Zealand Rifle Brigade in Somme, France when he was killed in action on 5 April 1918. See: Cenotaph Database Auckland War Memorial Museum. http://muse.aucklandmuseum.com/databases/Cenotaph/14047.detail?Ordinal=2&c_surname_search=scanlan&c_firstname_search=william