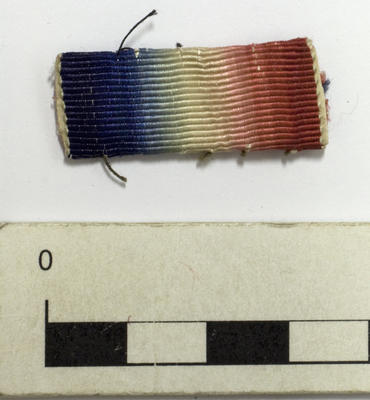 Description
A ribbon for a 1914-1915 Star sewn around a cardboard backing.
See full details

Credit line
This ribbon is associated with the 1914-15 Star earned by Captain Eliot Millar King. Captain King earned A Distinguished Flying Cross and also a Croix de Guerre with Silver Star piloting Short seaplanes with the 64th (Naval) Wing based at Port Said, Egypt during World War I. Flying in at least sixty-three sorties, he was involved in bombing, ship escort and submarine search.