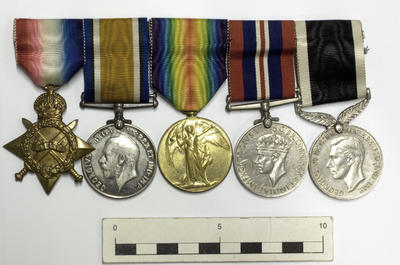 Description
A War Medal 1939-45. The cupro-nickel medal features a crowned portrait of King George VI on the obverse "GEORGIVS VI D:G: BR OMN:REX ET :INDIAE:IMP" is embossed around the outside. The reverse features a lion trampling on a dragon. "1939" and "1945" is embossed on it. " MAJOR J HOUSTON. N. Z. T. S. 818189 " is marked on the edge. The ribbon features a narrow red stripe at the centre, with a narrow white stripe on either side and two intervening stripes of blue. It is mounted as part of a medal group of five.
See full details

Credit line
This medal was awarded to John Houston for his service in the New Zealand Temporary Service during World War II. The prominent south Taranaki lawyer also served in the Medical Corps during World War I. His service medals were donated to Taranaki Museum along with his large collection of other military medals.