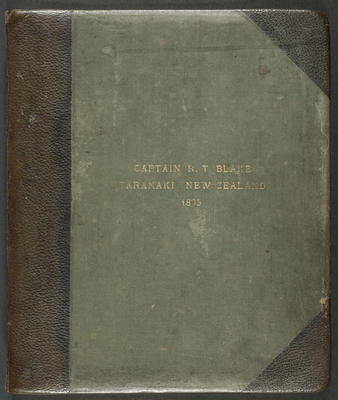 Production date
Circa 1895
Description
Photograph album belonging to Captain R.T. Blake (c1845-1904). The album has 26 double sided pages and contains approx 138 photographs. 122 of these photographs depict people and places in New Zealand while 16 of the photographs are of art works. The photographs include many portraits of Māori and settlers. Some photographs towards the front of the album are likely to be family members of Captain Blake as they are annotated with the surname Blake. There are also portraits of soldiers and companies of the Taranaki wars. As well as the portraits there are many pictures of New Zealand buildings and locations including New Plymouth buildings and locations (Waiwakaiho bridge, Marsland Hill and the Sugar Loaf islands). The majority of photographs are annotated throughout the album. Empty spaces are also annotated where photographs were probably intended to be attached. There is one loose page that has been placed near the middle of the album. It appears to be taken from a different album as it is smaller than the pages in this album. It has photographs of places in Taranaki on it.
The album is bound in green textured leather with a strip of brown leather down the spine and brown leather across the outer corners of the cover.
See full details