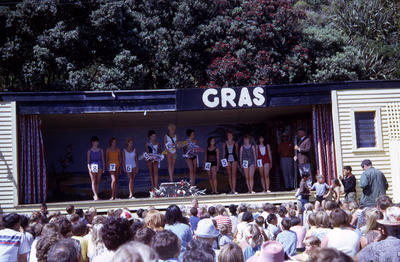 Production date
Circa 1968
Description
Colour transparency slide showing contestants on stage at a beauty pageant during the Opunake Mardi Gras. The first, second and third placed contestants are standing on a podium in the centre of the stage holding flowers and weaing sashes with 'Miss Opunake' on them. There are three other women on the left and four on the right, with a man standing at a microphone on the right and another man visible behind him. The women are all wearing swinsuits. A large crowd can be seen gathered in front of the stage. The stage has lost part of the mardi gras sign so it only says 'GRAS'. The man standing at the microphone has been identified as Peter Ranford.
See full details

The man with the microphone is my father Peter Ranford. He was the organiser of the event