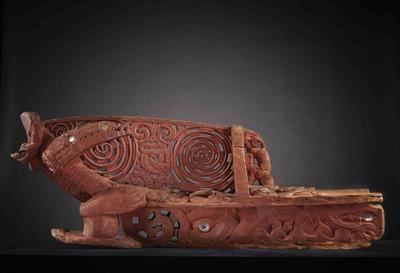 Description
Carved canoe prow figurehead of a waka taua class of canoe. The tauihu is overall structurally sound though some areas of rot and damage are evident on the very front (arero) and the extreme back areas. Lashing holes both of the old square or triangular chiselled type as well as more modern round drilled holes are evident. A large hole is evident on the thigh/hip area of the forward carved figure. This hole appears to be of a natural origin either from a former wood knot that has rotted or could possibly be damage from a large wood grub with perhaps further rotting happening over time.

The entire piece is painted red though some areas have worn back to the wood. Paua shell is present in many of the eye areas

The side and frontal view is dominated by a large forward facing figure with arms stretching behind and knees bent upwards with feet skimming above the water-line. This forward figure has pakati (notched) pattern between parallel haehae lines. Also areas of scroll (unaunahi) patterning and notches on raised haehae. The Thigh area has a puhoro design with spirals (rape) on the buttock area. The back stretched arms have multiple manaia represented along their length. This figure has areas of stylisation (such as the face) and also areas of naturalistic features (such as the feet).

Two large fretwork spirals separated by a fretwork tiki figure form the tauihu "spine" area. The appearance of this expansive area gives the feeling of a large volume though the thinness of the spine and the further removal of material through the fretwork means that the weight of this area is greatly reduced and the element of light penetration through the fretwork further creates a unique visual effect.
The spirals are double helix and each of the two concentric points travel in approximately three revolutions. The spirals are inter-joined by an alternating solid timber or free space chequered work. These blocks are decorated with large notches. The figure between the spirals is highly stylised and constructed through the use of sweeping curved oblong shapes. These oblongs are decorated with an unaunahi type scroll pattern with some spirals also present.

Below the fretwork and directly behind the buttock area of the main frontal figure is a solid horizontal tiki figure on its back facing upwards towards the sky. This figure is in a squatting position with its arms travelling behind the thigh area and up through its legs with its hands finally resting on the stomach. A large hole under the arch of the back allows for lashing string to be treaded between the transverse sides. There are also three further lashing holes in this area on each side (six in all). In former times these holes allowed for the lashing of special decorations which were used to embellish the appearance of the vessel for visual impact. Paua shell is in its eye sockets.

At the very bottom area on both sides of the tauihu (four in total) are two intertwined manaia figures facing away from each other with the heads terminating at each end of the carving. One of the heads has a mouth that is shaped as a spiral and is achieved using fretwork. These figures are carved using the visual vernacular of the north Taranaki style of carving, this includes sinuous winding figures with a central raised ridge down the centre of the body, interlocking arms that travel through or around the body (one arm is evident penetrating the eye socket)
See full details