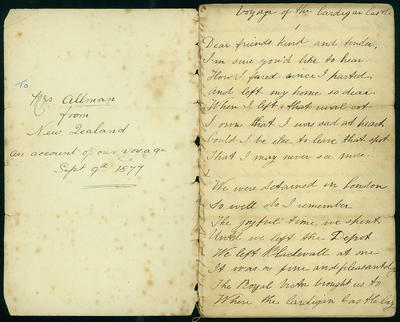 Voyage of the Cardigan Castle

Production date
09 Sep 1877
Description
Charlotte and Phillip Bint immigrated to New Zealand on the ship ‘Cardigan Castle’ in 1887. They settled in Tarata during the 1880s. Their youngest daughter Catherine married Sydney George Smith.
This 13 page document is a handwritten account of the voyage on the Cardigan Castle. The original version of the document was composed by an anonymous group of passengers aboard the Cardigan Castle, including a retired sea captain. It is thought that several copies were made, and this copy is written in Charlotte Bint's hand. It is dated 9 September 1877 and is addressed to Charlotte’s mother Mrs Allman, who remained in London.
The Cardigan Castle left Gravesend, London on 20 September 1876 and arrived in Lyttelton on 6 January 1877 with 320 immigrants aboard. The journey was rough. The passengers endured several severe storms (including a cyclone), 13 deaths, extreme hot and cold temperatures and an outbreak of disease which resulted in the occupants being quarantined at Ripapa Island for three months.
See full details

Voyage of the Cardigan Castle