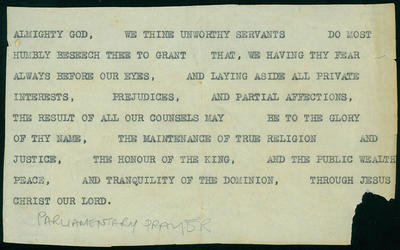 Production date
1899-1934
Description
Papers relating to Sydney George Smith during his time as a Member of Parliament for the Taranaki electorate and The Amalgamated Society of Railway Servants.
See full details

Copy of House of Parliament prayer belonging to Sydney Smith.

Illuminated scroll presented to "Mr S.G.Smith" to certify he "was admitted a member of the New Plymouth Branch of the Amalgamated Society of Railway Servants of New Zealand // 5 May 1899"