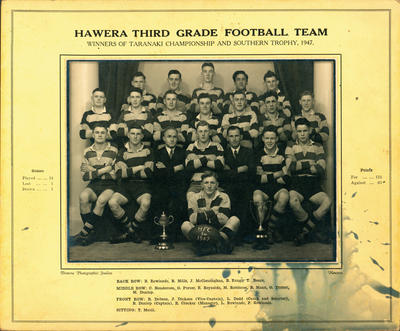 Production date
1947
Description
Studio group portrait of the Hawera third grade football team, winners of the Taranaki Championship and Southern Trophy in 1947. The team is arranged in three rows with one man seated on the ground in the front row between two trophies and with a ball with "H.F.C. 3rd 1947" written on it. The players are all wearing striped rugby uniforms with two men in the front wearing suits. The photograph is mounted on card with the names printed below and details about games played (14 played, 1 lost, 1 drawn) and points (153 for, 65 against) printed on the sides.

From left in the back row is B. Rowlands, B. Mills, J. McClennaghan, B. Rangi and T. Beare. From left in the middle row is C. Henderson, G. Purser, R. Reynolds, M. RObinson, B. Mann, G. Turner and M. Dunlop. Seated in the front row from left is R. Dobson, J. Dickson (Vice-Captain), L. Dodd (Coach and Selector), B. Dunlop (Captain), R. Crocker (Manager), L. Rowlands and P. Rowlands. Seated on the ground in front is T. Meuli.
See full details