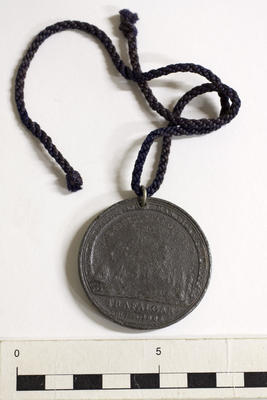 Description
A Boulton's Trafalgar Medal. The bronze medal features a profile of Vice-Admiral Viscount Horatio Nelson in uniform on the obverse. " HORATIO VISCOUNT NELSON. K.B. DUKE OF BRONTE. &." is marked around the edge. A general view of the battle is featured on the reverse. " ENGLAND EXPECTS THAT EVERY MAN WILL DO HIS DUTY " is also marked around the edge. " TRAFALGAR. OCTR. 21. 1805 " is also marked on the reverse. " ROBERT MASON H.M.S. / NEPTUNE / " is roughly inscribed on the reverse. An inscription on the egde is illegible. A blue woven cord is attached tot he medal by a simple suspension ring.
See full details

Credit line
After Nelson's victory at Trafalgar in 1805 prominent Birmingham industrialist Matthew Boulton distributed about 15,000 Trafalgar Medals at his own expense to those involved in the battle. According to the Fitzwilliam Museum in Cambridge, England these medals were all in white metal. In later years a number of presentation issues in other metals were made. This medal is inscribed to Robert Mason of the H.M.S Neptune but it has not yet been confirmed if it was actually presented to him. This medal was donated to Taranaki Museum as part of the large collection of south Taranaki lawyer John Houston.