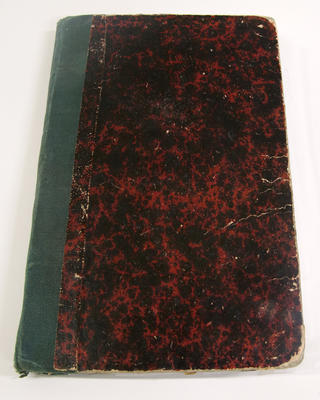 Description
Victor Caddy Davies was a well known nurseryman and New Plymouth personality, who served in France in World War One. While stationed in the Somme district in 1917 and 1918, Victor found this children's reading book, similar to New Zealand's School Journal, in the deserted and bombed village of Sailly. He used it to store samples of plants and flowers he collected from around the Somme district, as well as note down where some of these samples were found. On his return to New Zealand in 1919, Davies built up an export business in both indigenous and exotic plants, and his knowledge was bolstered by the learning he did while overseas at war.
A hardbound book with a mottled red and maroon cover, and a dark green spine. Gold lettering on the spine gives the title ' MON JOURNAL '. Inside the book is a French children's story book, with black and white illustrations and text. Tucked between pages are pressed botanical specimens from France and handwritten notes about Victor Caddy Davies' war service and collecting in France.
See full details

Envelope. Business card, a piece of paper in German and a travel pass in French. These were originally stored at the back of the book.